The History of the FNM

It was November 18, 1970 and the whole country knew there was something grievously wrong inside the governing Progressive Liberal Party not quite four years after it came to power in January 1967.

The collapse in 1969 of an agreement between the Government and a consortium of international investors for the upgrading of Bahamas Airways – the national flag carrier – had caused serious concern in the PLP and was bound to affect the development of air services for many years to come. Not to mention the damage it would do to investor confidence in the country.

Then there was the same year a protracted dispute between the Government and the Grand Bahama Port Authority over proposed changes in the Hawksbill Creek Agreement under which the second city of Freeport had been created. This ended in a unilateral amendment of the agreement by an Act of Parliament.

Although there was no split on the floor of the House of Assembly, it was known that some Members – including Cabinet Ministers – had grave reservations about the way the whole affair had been handled. They feared serious adverse effects on the future of Freeport, more damage to the country’s status as a safe haven for investment and a threat to the full employment the country was enjoying.

The bottom line, of course, was growing doubt over the leadership of Prime Minister L. 0. Pindling. The group which had achieved momentous change through consultation, comradeship, and cooperative effort was in disarray and the idea of “first among equals” was rapidly replaced by the increasingly dictatorial and incompetent – rule by a Maximum Leader. 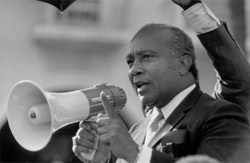 So a full-blown dissident movement erupted in the governing party. At Lewis Yard in Grand Bahama, the leader of the dissidents, Cecil V. Wallace-Whitfield, two of his parliamentary colleagues, Maurice Moore and Arthur Foulkes, and others including the late Garnet Levarity, were set upon broad daylight by chair-wielding Pindling loyalists. Then there was the explosive convention of 1970 when Prime Minister Pindling enraged the dissidents by presenting his One-Man Manifesto and telling his comrades-in-struggle to toe the line or ”get the hell out of the boat!”

Mr. Whitfield, who was then Minister of Education, in a dramatic speech, warned the Prime Minister that the same valiant spirits who had helped to bring about the 1967 change, “those same spirits can fire up again!”

Then he did the unthinkable.

He resigned his Cabinet post right there on the floor of the convention and announced that he was “free at last” and safely out the Pindling boat – which the PLP had become.

All hell broke loose. But amidst the intense political activity and powerful emotions which rapidly mushroomed, the quiet voice of Anthony Roberts (now Fr. Roberts) issued a call for reconciliation. Mr. Roberts arranged an emergency conclave at the Stokes Thompson Cabana at South Beach.

Huddled in a garret-like room, the hierarchy of the PLP poured out their fears and misgivings to their Leader. Up to that point, Mr. Pindling had said only one thing: ‘All Prime Ministers are called dictators. ”

Now Mr. Roberts called on the Prime Minister to respond. The room was hushed. Would he seize this opportunity to redeem his leadership and his party and maybe the country too? But there was only contemptuous silence. The meeting was over. He went down the stairs, got into his car and was driven off. The die was cast. Those valiant spirits – or some of them – would indeed flare up again.

No-confidence in the Prime Minister

Now it is late in the night of November 18 – early morning of the 19, really – and the House of Assembly is debating a motion of no-confidence in the Prime Minister. Outside, there is consternation, fear, and anger among the crowd. And blood in their eyes. There are no barricades so they are at the door of the House and all around the statue of Queen Victoria – waiting and making clear their intention to set upon those who would dare oppose their Prime Minister at the height of his power.

The debate has raged for 11 hours and now the moment of truth has arrived. Perhaps Bahamian politics will never see a moment tenser and more fraught with danger, not only for the dissidents but the country as well.

The motion is put.

It is a counter-motion of confidence so those opposed must stand.

The Dissident Eight enter the history books of The Bahamas

And so the Dissident Eight entered the history books of The Bahamas. It was not until the following year, the 20th October 1971, that the Constitution, first platform (Declaration of Commitment), symbol (The Torch), fanfare (from The Lion in the Winter) and the name of the Free National Movement were settled and announced to the Bahamian people.

But that night November 18-19 just before one o’clock, a new political movement was born. The Dissident Eight walked down to face the crowd howling for their blood. As Mr. Whitfield stepped into the crowd the blade of a knife flashed towards him but was deflected by the hand of a supporter.

A cordon of the Royal Bahamas Police Force held firm and Top Officer McDonald Fields led Mr. Whitfield to his car and safely on his way. The others followed and were later joined by Number Nine, Kendal Isaacs, Number 10, Orville Turnquest … and the counting continued for two decades until the 19th August 1992 and beyond.

Two Cabinet Ministers – Mr. Wallace Whitfield and Health Minister Dr. Curtis McMillan – resigned their portfolios, and with six MPs, became the “Free PLP” which went on the following year to contest the Central Andros (Mangrove Cay) bye-election in 1971, necessitated by the death of Clarence A. Bain.

The eight who formed the Free PLP, became the FNM and were eventually joined by the defunct and disbanded United Bahamian Party, and members of the National Democratic Party and others.  The Free National Movement (FNM), then contested the 1972 general elections, with Kendal Isaacs as Party Leader.

A Period of Turmoil

By the 1977 general elections, there had been a fracture inside the FNM, with two Opposition sides – the FNM under Cecil Wallace-Whitfield and the Bahamian Democratic Party led by J. Henry Bostwick, were facing the governing PLP.

Voter support was badly split, but by 1982, however, the Free National Movement was again intact, and in that year’s general elections the Party won a total of 11 seats, including the first House of Assembly seat (Yamacraw) ever won by a woman, Dame Janet Bostwick.

Following a damning 1984 Report of a Commission of Inquiry into Drug Trafficking in and through The Bahamas, which implicated a many persons in and near the PLP government, victory for the FNM at the 1987 polls seemed assured. But skullduggery and suspected voter fraud took place, and the Party ended up with only 17 of 49 seats.

Kendal Isaacs resigned as Party Leader following the 1987 elections, and Cecil Wallace Whitfield assumed leadership, with Orville Turnquest as Deputy Leader. In the meantime, Mr. Hubert Ingraham the PLP Member of Parliament for North Abaco, had been expelled from that Party, but won his seat in the 1987 polls as an Independent.

Sir Cecil Wallace Whitfield’s health had been failing for some time, and in April of 1990 Mr. Ingraham joined the FNM, becoming immediately Parliamentary Leader.

The FNM swept the August 1992 elections, winning 32 of the 49 seats to become the Government of The Bahamas.

As promised, the FNM Government cut back the number of Parliamentary seats from 49 to 40, and in the March 1997 general elections, the FNM won 34 of those seats. Later that year, after PLP Leader and former Prime Minister Sir Lynden Pindling, resigned his South Andros seat, the FNM won that seat also, giving the governing Party a total of 35 of 40 seats. 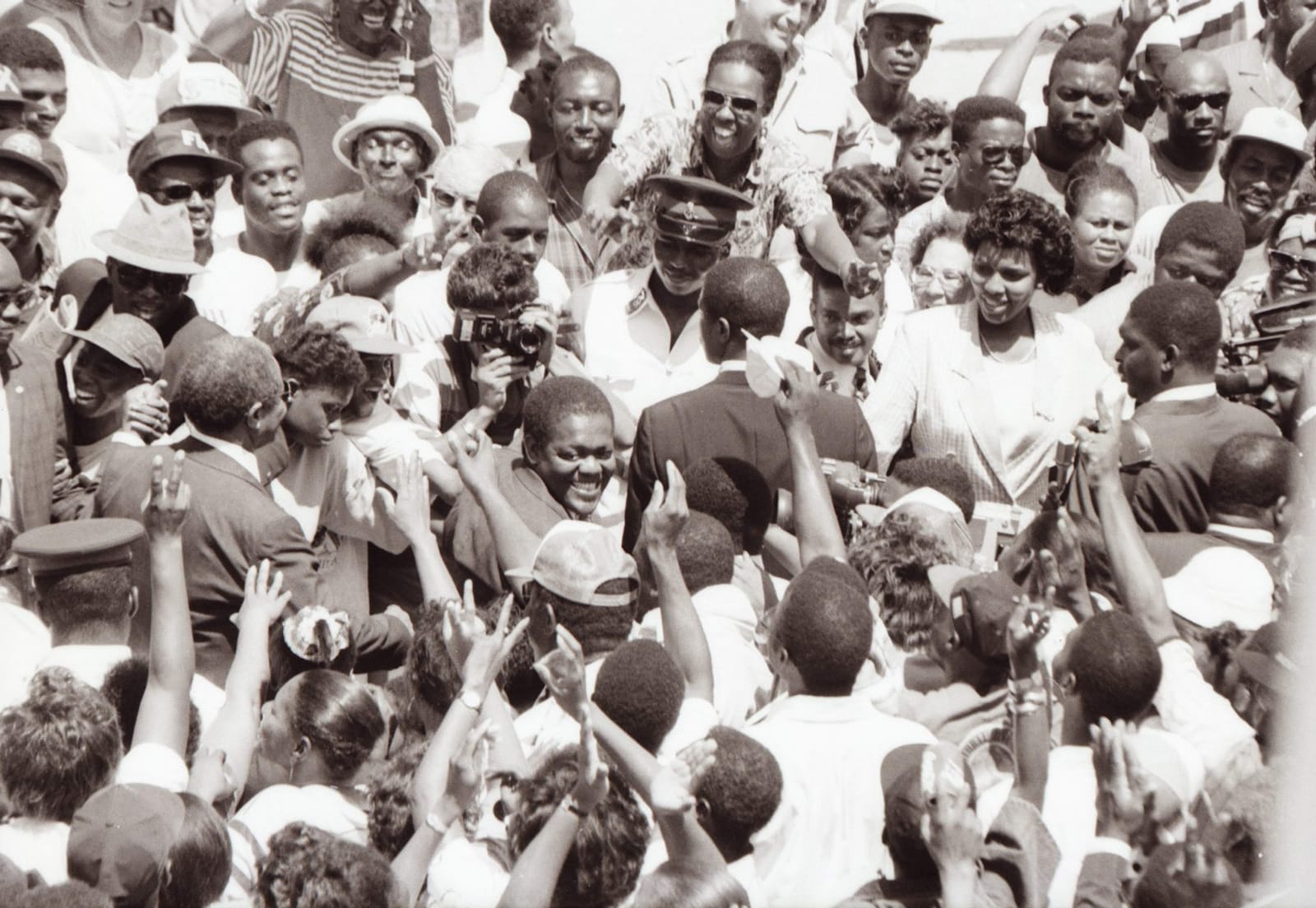 General elections were held on 2 May 2002, and the Free National Movement, which had served as the Government since August 1992, was defeated, winning only seven of 40 seats, with only a single seat in New Providence.

Mr. Tommy Turnquest, who had lost his Mount Moriah seat, had assumed his elected position as Leader of the FNM on 3 May 2002. He was appointed by the Governor-General as a Member of the Senate, and led the Opposition’s business in that Chamber.

Mr. Alvin Smith, the elected Member of Parliament for North Eleuthera, and who had served as Parliamentary Secretary in the FNM Government, was chosen as Leader of the Opposition.

After a busy and colorful 40-year existence of disappointments and at least three (3) non-consecutive terms of shining triumph, the Free National Movement came under the leadership and vision of a new breed and generation of Bahamians led by The Most Honorable Dr. Hubert A. Minnis. The FNM once again righted the wrongs of the decadent PLP, returned fiscal responsibility to governance, restructured and re-armed the Party. It was on May 10, 2017, that the Free National Movement won the government capturing 36 of 40 seats, sweeping away the former PLP  government, which was steeped in corruption and inertia, ushering a new phase of Bahamian development and focusing on the needs of the people rather than the selfish greed of a few.