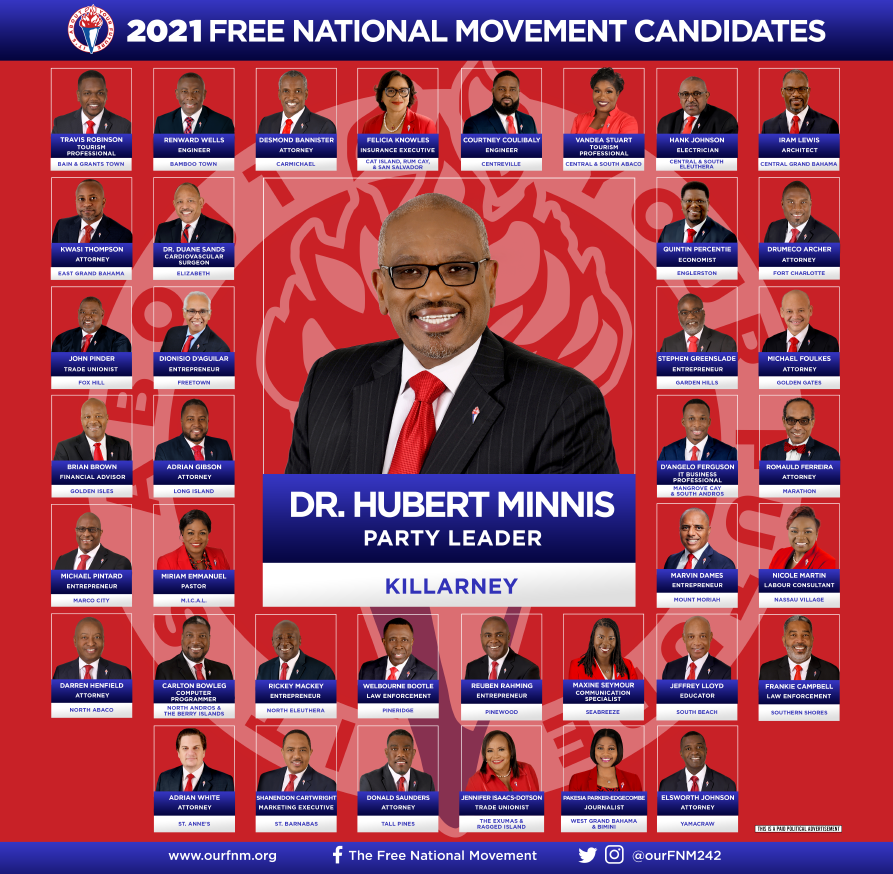 “Brave Davis continues to hide behind lawyers in his disingenuous attempts to hide his disastrous record of failures and PLP scandals. Using party attorneys to strong arm TV regulators, Davis would hope the public doesn’t know what everyone has known for a long time – Brave served as Perry Christie’s right-hand man and top lieutenant, in what was one of the most historically disastrous regimes.

“Don’t take our word for it. What Brave doesn’t want you to know was just printed plain as day in the media, again. His PLP’s record on crime? The Nassau Guardian accurately stated, ‘the current murder record was set in 2015 when Davis was the Deputy prime Minister’. The stagnant economy under the PLP? The Guardian cited a report by the International Monetary Fund which stated, ‘there was essentially no real economic growth’ during the last PLP administration.

“And on corruption the Guardian makes clear, ‘it is an irrefutable fact that the PLP in office under Christie drifted from scandal to scandal.’ Going on to write, ‘The PLP’s leadership (Brave Davis!) itself commissioned an independent election study to help determine the keys to their defeat, in which they ‘identified corruption perceptions as a major reason for the PLP’s defeat in 2017.’

“Bahamians know that nothing with Brave has changed since the PLP was voted out of office in historic fashion in 2017. He wasn’t trusted then and he isn’t trusted now – and hiding behind lawyers to threaten TV regulators won’t change that fact. Try as he may, Brave Davis can’t defend his shameful record, but neither can he run from it.”

The Free National Movement (FNM) issued the following statement regarding Brave Davis’ mismanagement of BAMSI while serving as Minister of Works:

“Brave Davis is doing everything within his power to hide the mountain of failures that took place while he served as Perry Christie’s top lieutenant. However, Bahamians won’t soon forget why the woeful PLP was overwhelmingly voted out of office in 2017. It was two years ago yesterday that the Nassau Guardian stated, ‘we do not believe that the PLP has moved much on the trust barometer.’

“The article takes the reader back to when Brave Davis was both Deputy Prime Minister and Minister of Works – an era the Nassau Guardian described as ‘a period of shockingly wasteful spending.’ A dormitory at BAMSI in Andros had been set ablaze in January of 2015, after having paid the building contractor over $500,000. Under any normal set of circumstances, the dorm would have been covered by insurance. But, either by sheer ineptitude or rank incompetence, Brave Davis failed to purchase insurance – a requirement for building projects before they begin.

“Davis’ incompetence left taxpayers on the hook, but it was his dishonesty in dealing with his colleagues in Parliament where he showed his true colors. Brave first insisted the insurance had lapsed, but when it was brought to his attention that the insurance company, which he claimed owned the policy, didn’t even exist, Davis ducked and dodged, saying he needed to gather more information. It took two weeks before Brave finally came clean, admitting proper insurance had never been purchased for the building. So, taxpayers became his fallback plan.

“Today, whether hiding behind lawyers or contradicting himself weekly regarding the Government’s pandemic response measures, Brave Davis remains allergic to the truth. Bahamians shudder to think what disasters would unfold if a Brave Davis-led PLP Government held power during the country’s last two crises.”

Which Brave Davis Will Speak Tomorrow?

“In an effort to prevent transmission of the virus that has taken countless lives and wrecked economies globally, nations across the world are toughening pandemic-response measures as we face this latest surge. Our Prime Minister, Dr. Hubert Minnis, understands the burden new pandemic measures present, but he also knows the vital need to take precautions now, in order to keep Bahamians safe, in the hopes of protecting our economic reopening and to keep Bahamians working.

“Yet, right on cue, Brave Davis responded with his usual, contradictory, politically-motivated attacks. It was only two weeks ago that Davis was expressing his concern and disapproval of the impending dropping of emergency orders, but now, as the Government takes steps to fight back against the virus sweeping across the globe, Brave is dismayed at the actions to save lives, suggesting they are ‘disruptive’.

“In March 2020, Brave was ranting that the administration wasn’t ‘sufficiently proactive enough’. By mid-November, it was the pandemic response measures ‘may adversely impact the public.’ Then just days later, he was asking Bahamians to ‘exercise self-discipline and comply’ with the lockdown measures which he stated, ‘are in line with World Health Organization guidelines.’

“Which is it Brave!?! Too much? Not enough? Just pick a position and stick with it for a while. Brave’s politically-motivated attacks only show that, like a politician, he is always speaking out of both sides of his mouth, even during a global pandemic! Despite the woeful PLP’s continued criticism, Prime Minister Minnis will continue working to save lives and livelihoods by making the tough but necessary decisions to keep Bahamians safe and businesses open.”

Try As He Might, Brave Davis Can’t Hide From His Party’s Record

The Free National Movement (FNM) issued the following statement regarding the PLP’s continuing efforts to hide their record from the public:

“It was two years ago this week the woeful PLP went into their party convention. The media accurately lambasted the party at the time, writing that with returning leaders like Brave Davis and his hand-picked chairman Fred Mitchell – who sought to run unopposed – as former members of the Christie Cabinet – ‘they will all have a difficult time seeking to project the party as the ‘new PLP’ that can be trusted.’ And a Tribune editorial has publicly called them out, writing, ‘The New PLP — Same as the Old One?’

“In fact, the press also wrote the PLP was, ‘still struggling to portray itself as a dynamic and progressive force that can be trusted by the electorate once again’. Through Hurricane Dorian response and the pandemic, Brave Davis and his PLP have done nothing to assuage those fears. It’s not lost on anyone, except Brave himself, that his own party’s autopsy after their disastrous showing in 2017 pointed to, ‘the perception of the PLP as corrupt was the single greatest element that impacted the party.’

“Back then, when one of his party’s Ministers admited publicly, ‘he sought contracts from Baha Mar for his family’s business’, the press wrote, ‘Did Davis condemn the actions of his colleague?… No.’ They criticized him for turning a ‘blind eye’ even ‘when clear evidence emerged that a minister had used his position to try to enrich his family’.

“Brave should read his own party’s 2017 autopsy because he can try to hide behind his party chairman and lawyers, but as someone who hopes to lead the country, he won’t be able to hide his party’s record on corruption from the people. He needs to understand that trust is earned, and the Bahamian people won’t go back to the days of politicians running the country into the ground as they serve themselves at the people’s expense.” 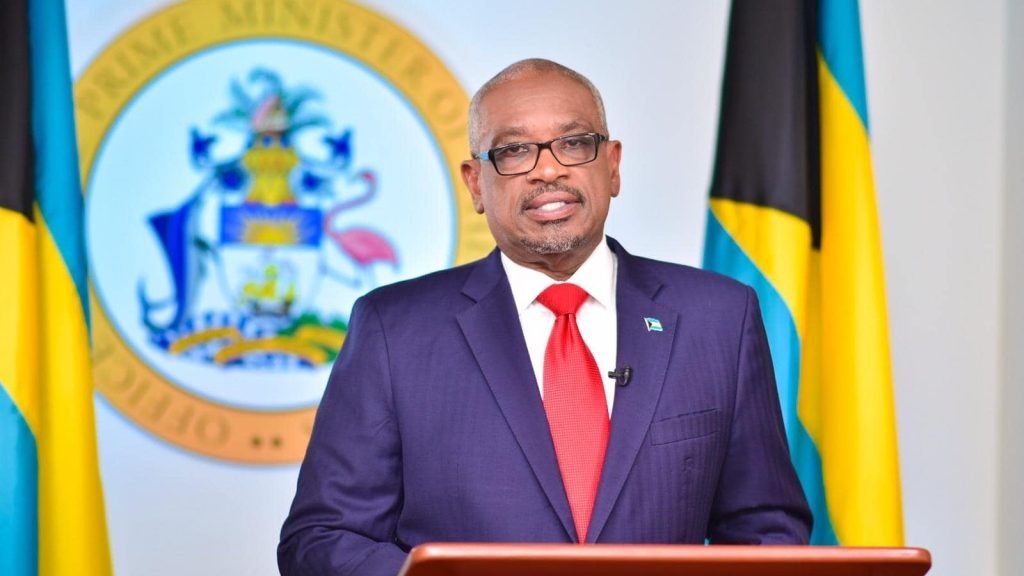 The Free National Movement (FNM) issued the following statement regarding the ratification of Prime Minister Minnis and Deputy Prime Minister Desmond Bannister, as well as candidates for the Fox Hill and Pineridge constituencies:

“Being raised Over-The-Hill, Prime Minister Minnis understands the important role that government should play in helping individuals to overcome challenges. While managing the largest disaster recovery effort in the nation’s history and leading The Bahamas through the global pandemic to a safe and responsible reopening, Prime Minister Minnis has not slowed the wheels of change. He has opened the door for young Bahamians to receive Crown Land; he’s made education free for qualifying students and has aggressively worked to develop the Family Islands while focusing on the redevelopment of traditional Over-The-Hill communities.

“Born in Andros, Deputy Prime Minister, Desmond Bannister has worked aggressively to improve infrastructure throughout the Bahamas, bringing a historic level of development to the Family Islands, and his success in improving BPL demonstrates his determination to advance the quality of life for every Bahamian.

“From a taxicab driver to an attorney to the President of the Caribbean Public Service Association, John Pinder’s strong work ethic and passion to serve the people has been evident for decades. In Parliament, Pinder will represent working families and help his FNM colleagues find complex solutions to complex problems.

“An Abaconian with a 40-year career in law enforcement, Welbourne Clinton Bootle is passionate about building a community in which our children and grandchildren are safe and have every opportunity to pursue their dreams. Drawing from his experiences, Welbourne will bring new ideas and determination towards fighting crime.

“The FNM is proud of all 39 candidates ratified for the next election because of the diverse skillset, experience and new ideas that they bring to the table. Together, these candidates, under the leadership of Prime Minister, Dr. Hubert Minnis, will continue making lasting reforms and creating a more modern, more transparent and more supportive government for all Bahamians.”